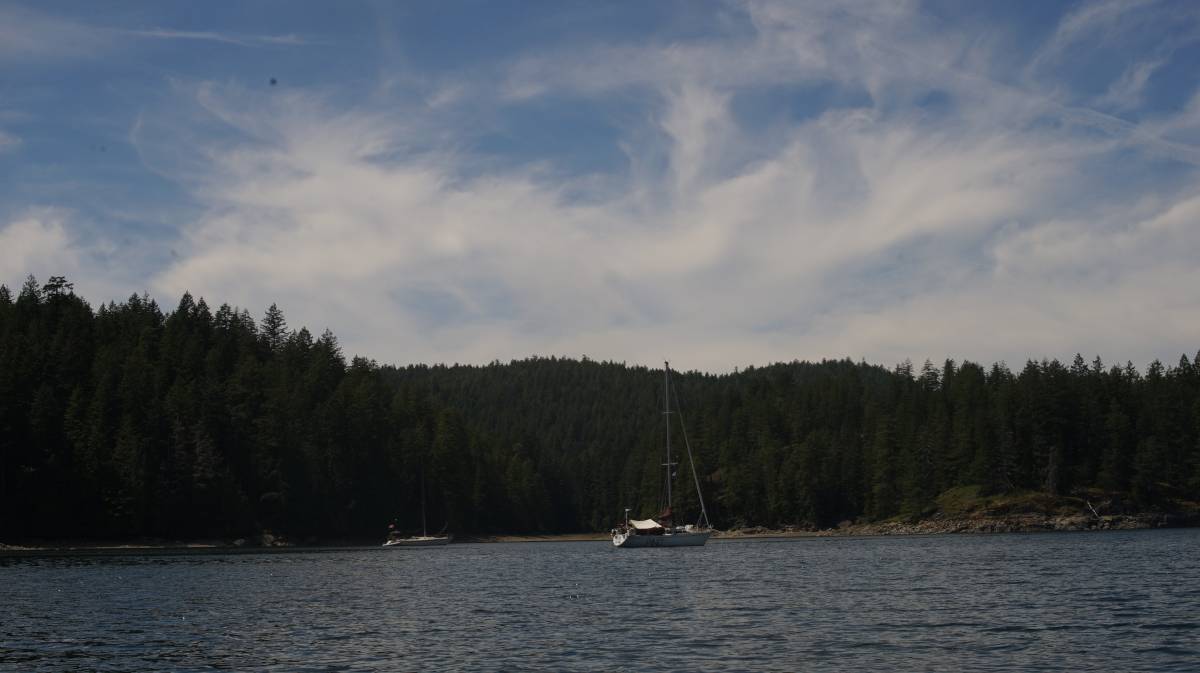 We left our beloved melanie cove on June 25th, in truth... we could have stayed there forever. It really was an amazing anchorage, but we had to leave because we had to move to Refuge Cove to upload an important video (our Nime 2022 talk). We were supposed to stream, but evidently that would not be possible on our connection. To upload this video we needed a good strong connection. The connection at other anchorages was fine for sending emails and other kinds of light uploads/downloads, but would never allow us to upload a 40 minute video. The connection there wasn't ideal, it took us 7 hours to upload it, but even this would have been unthinkable in Melanie Cove.

The next day, on June 27th, we left the dock for Háthayim Marine Park (Von Donop) on Cortes Island, a 15 nm sail from Refuge Cove. We had planned on going to Squirrel Cove, just a short 2.3 nm sail across the channel, but after reading about sailors fouling their anchors on submerged engine blocks and logging equipement we decided to go elsewhere, so we decided to try and sail to the north of Cortes Island.

The wind was forecast to be 10-15 knots from the NW, right on the nose. To get to the northern end of Cortes, it is necessary to pass through a long narrow channel (Lewis Channel), meaning that we would need to do a lot of tacks to get up there. Pino, with its deep draft and tall mast, sails very well into the wind, and so we decided to work our sailing muscles and to go for it. The wind was at 10-11 knots to start, nice and smooth, and the more we approached the mouth of the channel, the stronger the wind (accelerated through the channel). A sailboat was motoring behind us, and they were kind enough to get out of our way as we made short tacks back and forth.

Sailing this way is rather long, and exhausting, especially in 27 C weather and full sun. In the channel we saw clear-cut areas from logging, places that where never replenished with new trees. New growth on faraway hillsides is easy enough to see, the trees are greener, and draw a clear shape.

We arrived at the north of Cortes, and there the wind decided to stop and we motored the rest of the way. We assumed we would have better wind up there, it is difficult to ever have a guarantee of wind in places dotted with so many islands. The mouth of Hayathim Marine Park was just south of that point, where the entrance narrows and into the narrowest point is a rock, planted dead in the center and making all who pass near it sweat a whole lot. Because the inlet is big, there is a fair amount of current passing through this narrow, strong enough that we let the engine idle to let it carry us through, hugging the right side of the channel with the accursed rock on the port side of Pino. We came in on a rising tide, to make sure there would be plenty of water under our keel.

We found a spot in the southernmost bay, dropping the hook in 25 feet of water. The bottom is mud, and sticky, perfect for weathering anything. It makes a mess when we haul the anchor back up on deck, but at least it makes for a secure anchorage. We both like not having to worry about dragging, although, in truth, the 15 kg Rocna anchor makes it very difficult for the wind to push us around. 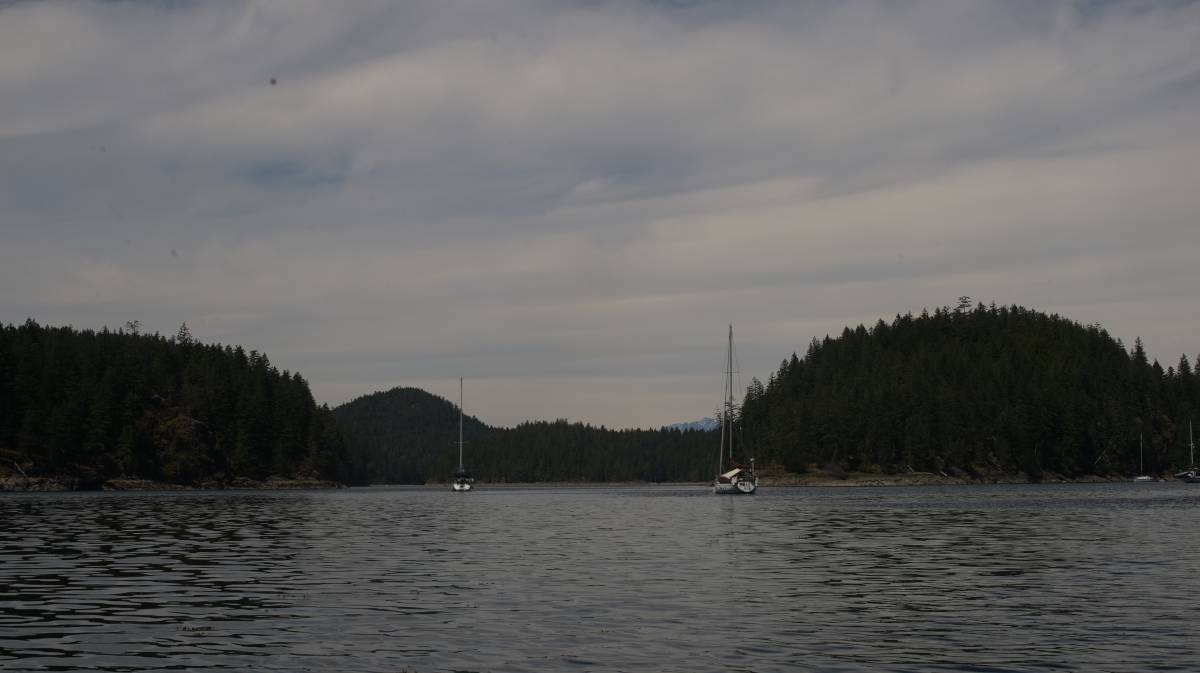 We arrived to the sound of a crow yelling, breaking the silence in the bay, and it did not stop yelling for the entire day, and the next day, and the next. We call it a yell rather than a caw, because it sounds like a human trying to sound like a crow. The bay is eerily silent when there's no wind, and so in its absence the terrible crow voice seemed to be amplified threefold, and more so with the echos that follow.

Like all other anchorages we've visited so far, people leave as quickly as they've arrived. Two minutes after dropping the hook the kayaks and paddleboards are in the water, then they do a quick paddle around the bay before happy hour, then the next morning they're gone, to hurry through many other anchorages we imagine. There is a general sense of hurry, of having to see it all. Staying in one place a while and exploring it in full is not an option. It is necessary to collect anchorages like one would collect little trophies or badges. If you stay anywhere for a single day, you haven't seen anything. 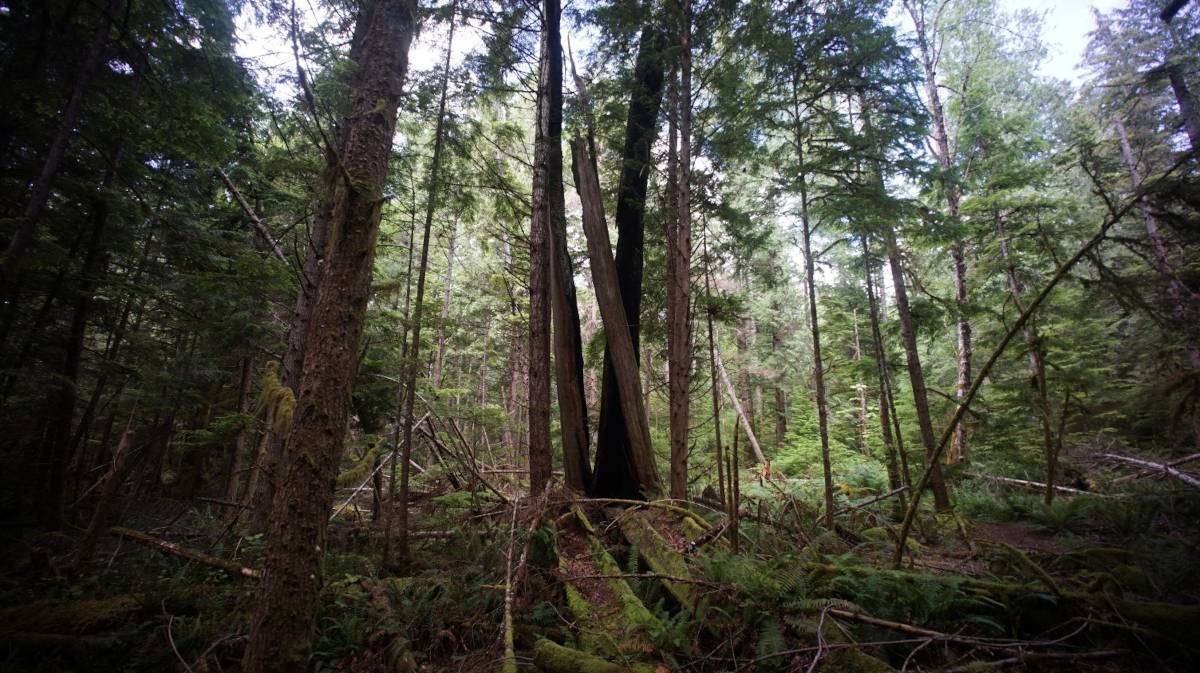 There are supposed to be both black bears and wolves on Cortes Island, we saw signs about it while walking the trail to the Squirrel Cove public dock. "You are now in Wolf country". This trail is very busy in the summer, and because it is maybe the bears and wolves know better than to come near. 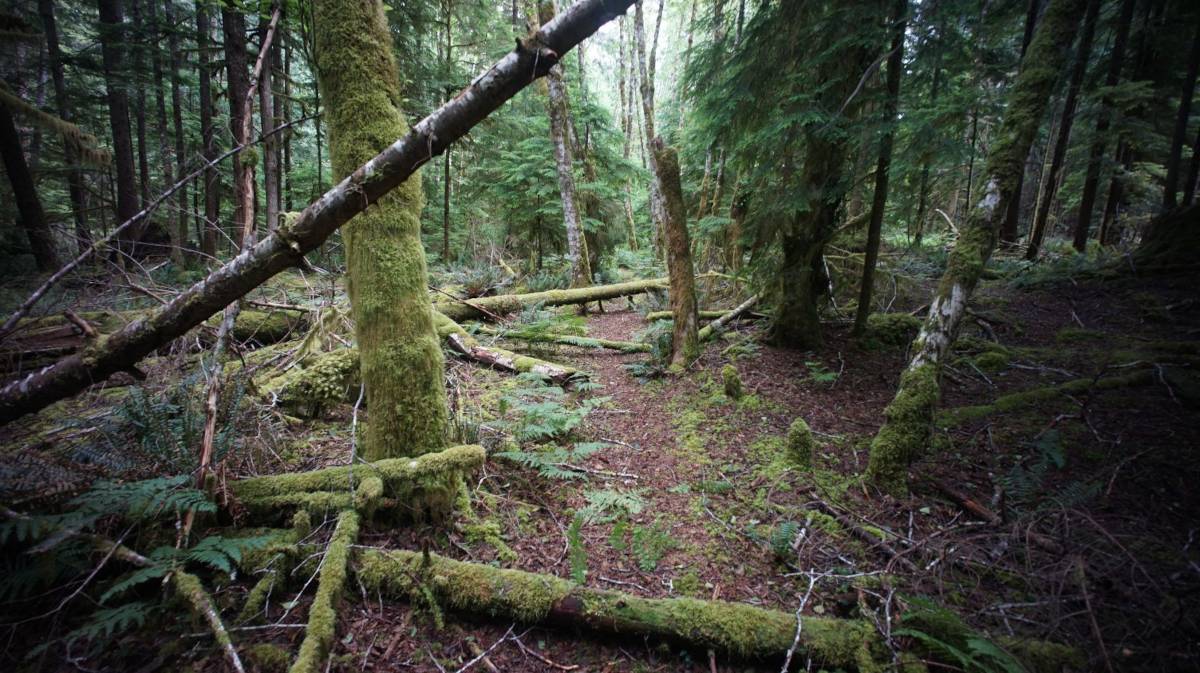 The scattered old-growth Douglas-fir trees of Cortes Island that now stand like sentinels in small groups were once average sized trees in a continuous blanket of old-growth forest. While the lush second- and third-growth forests on Cortes are beautiful, they are ecologically very different from the old-growth fir, cedar and hemlock forests that they have replaced. Unless management plans are implemented to restore old-growth composition and structure to all forest types, the magnitude of the negative ecological changes will increase over time. These changes include loss of soil fertility, water quality, and biological diversity (source).

Back when logging was done by hand, axes were used to cut large notches in the base of the tree. The loggers would then insert a wood plank into the notch, stand on it, and use crosscut saws to saw down the massive old growth trees that blanketed the area. There is still logging happening here that continues to destroy ecologically sensitive ecosystems, and that leave contamined water, no long-term jobs for residents, and that only really benefit people who live far away and that either aren't aware, or don't care about the cost of their business to the community or the province. 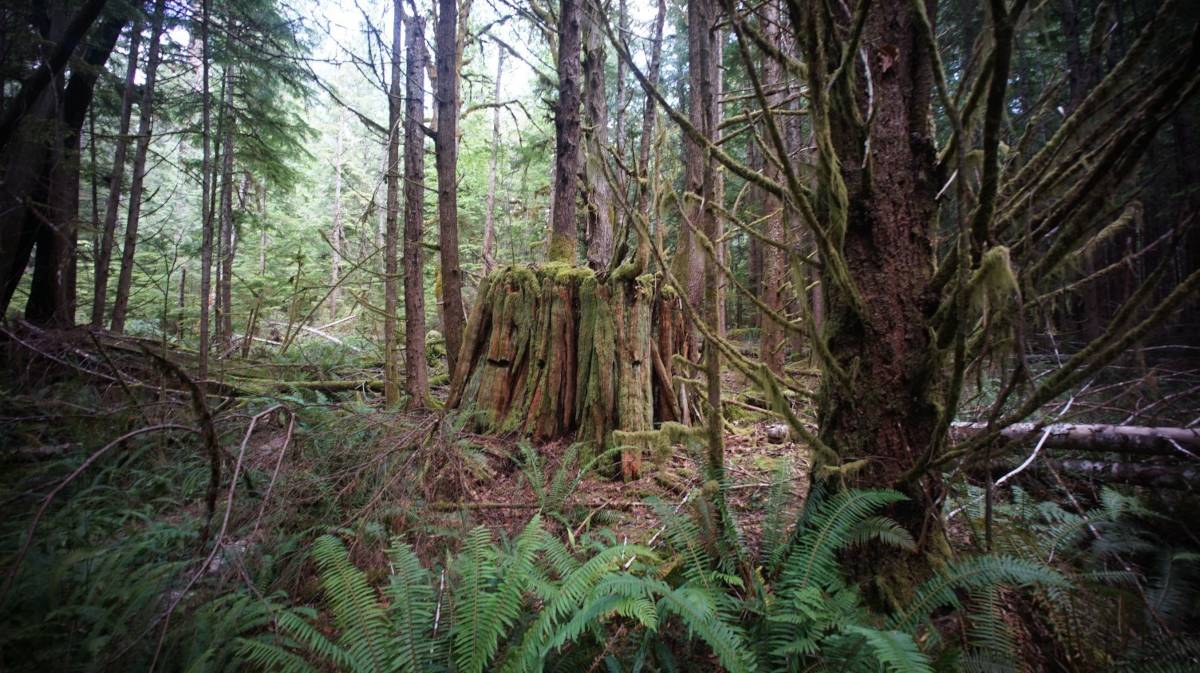 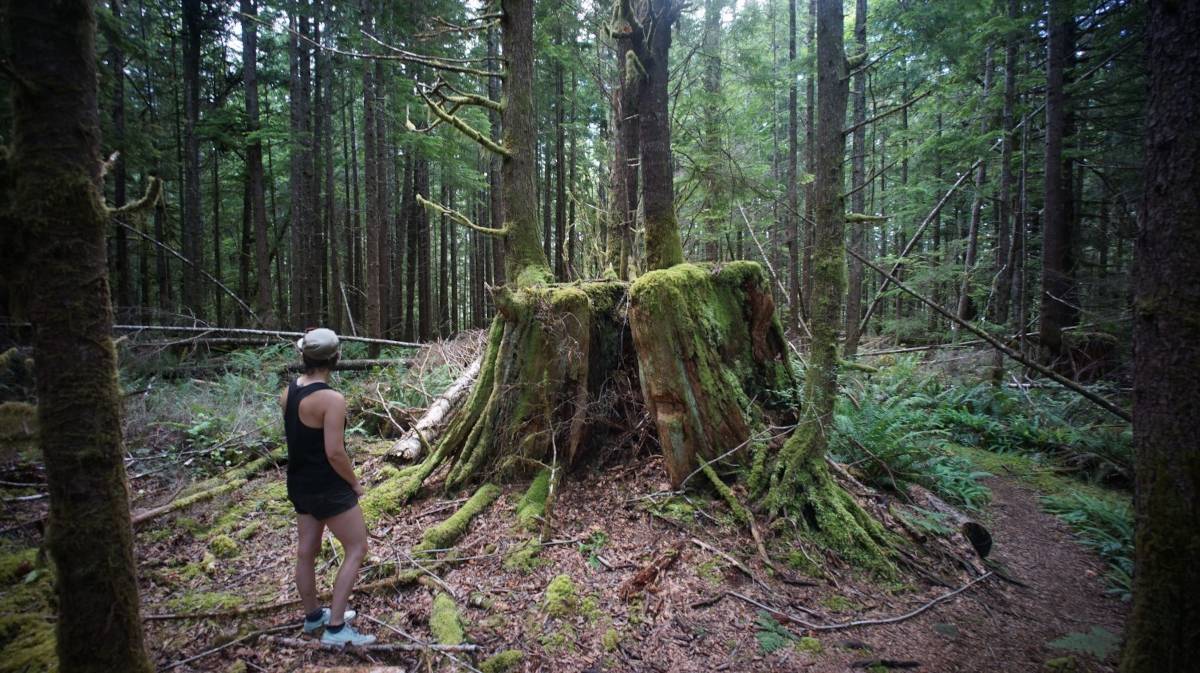 The trail to the Squirrel Cove public dock is around 5 km (10 km to and back). It was muddy at times, but the trail turned into a light stream for a while and it helped wash the mud away from our shoes. The path is marked by metal signs, posted on trees, bearing First Nations art of beautiful stylized goat. We found the goat at various points, and with it there we knew where to go. Some paths were obscured with heavy fern, making it hard to see any ground at all. The path crosses into Klahoose First Nations territory, and eventually stops at a road, but after walking in the forest a road is rather unappealing, and so we turned back. Roads are terribly straight and flat, and hot under a high sun. Also, rather walk under the eyes of wolves and bears rather than the headlights of cars. 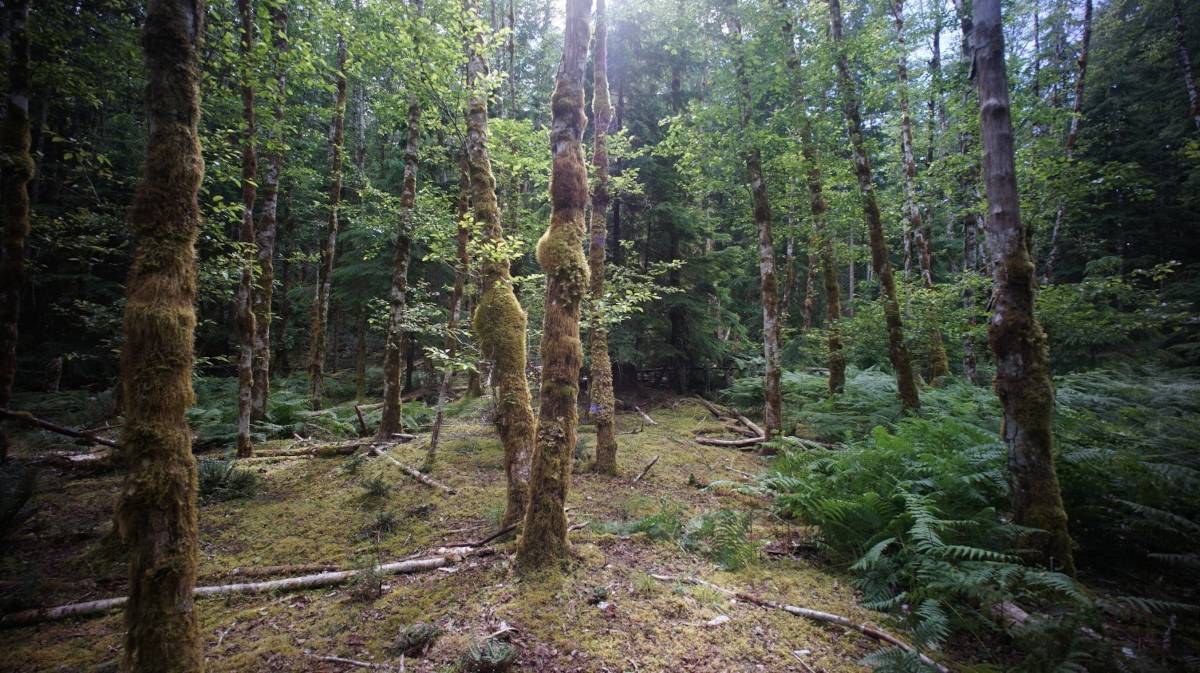 A few days later we ended up walking the entire trail, to see if the general store in Squirrel Cove had anything worthwhile to offer. The road section of the trail was long, and had a good incline. Predictably, the selection was underwhelming. We found some potatoes and onions. These stores mostly carry packaged, processed goods, condiments, junk food, things that last but that aren't cheap to buy and that don't really fill you up. While there, we were told that the Rogers network was down, Canada-wide. Paying Interac wasn't possible, people had no internet, couldn't call etc. The country was in a panic, but the forest didn't notice. We went back again later, returning with more potatoes, onions, and a 5 kg bag of basmati rice. They receive fresh produce on Saturdays, but the quantity is limited and is bought away fast. We're happy with potatoes and onions, especially when we can sprout legumes and grains aboard for fresh greens (see growing food).

Another plus of walking along that road, is that part of it is lined with salmonberries. Devine went to pick a bowlful and we made cake with it. Salmonberries are closely related to raspberries, but their leaves are slightly different, and each berry has a sort of crown around it. 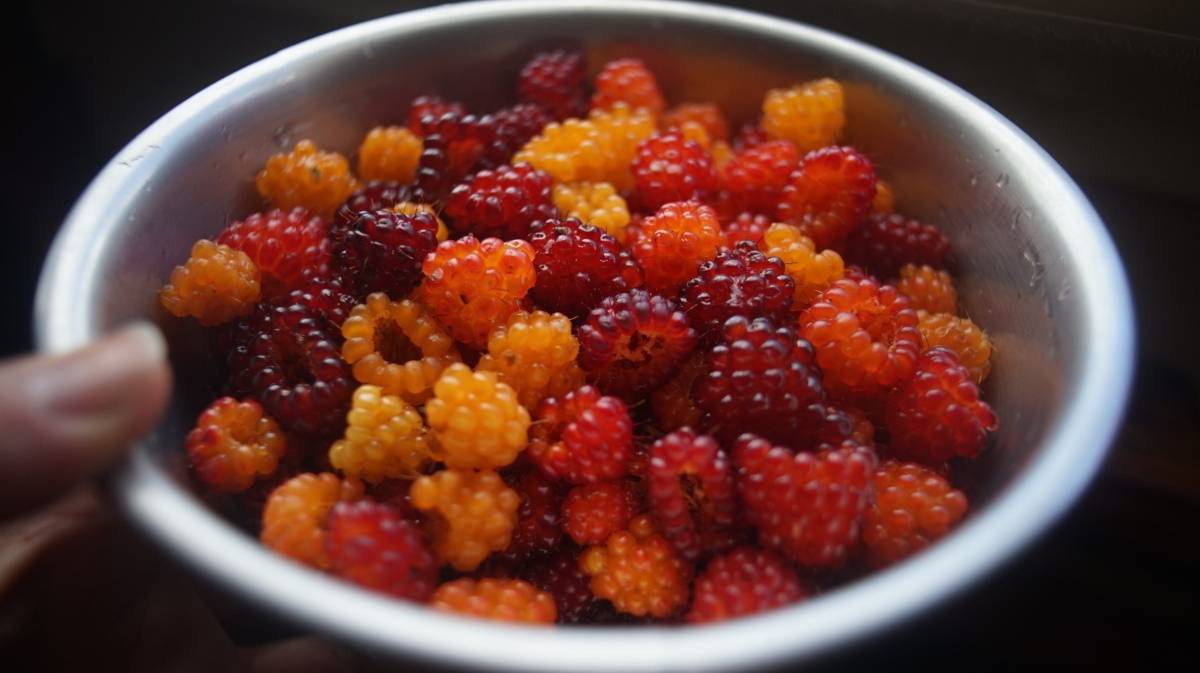 When walking in the forest, we like to take sticks with us to catch spiderwebs with instead of with our faces. 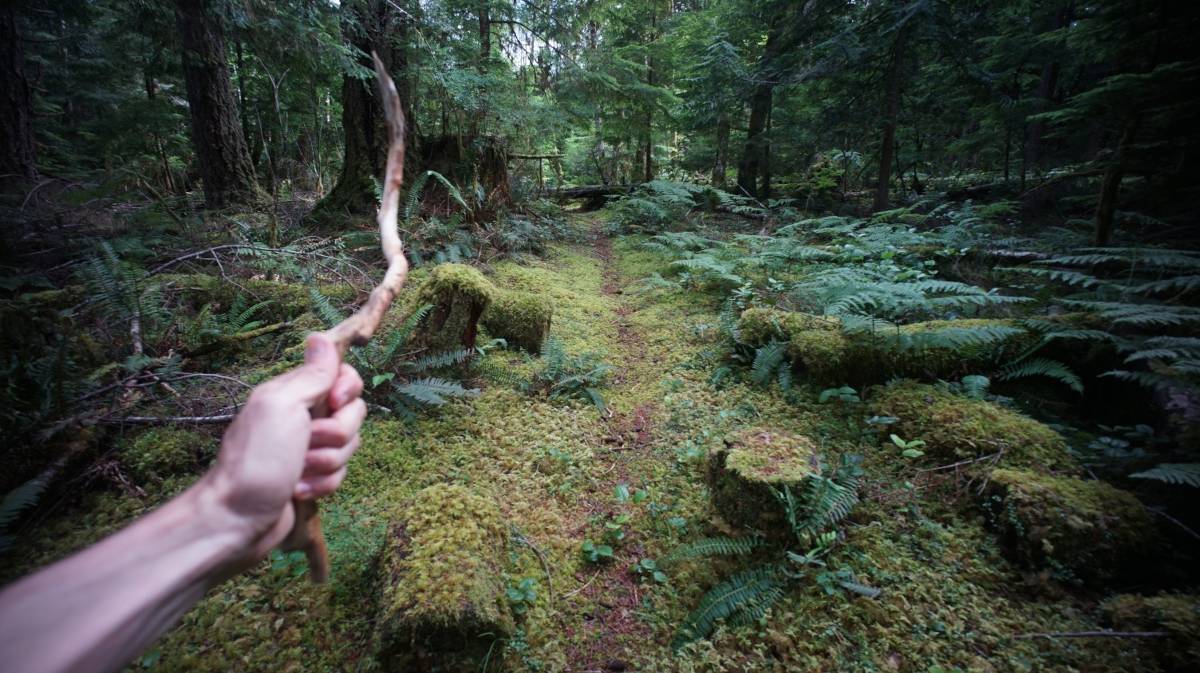 Rekka went to swim a few times, with both a wet suit and without, the water isn't terribly warm but the body adjusts quickly enough. On one particular day, we noticed that there were no jellyfish in the water. The tide was big (the lowest tide on record) and perhaps they got swept out of the bay with the current. The jellyfish returned later, as the tide rose yet again to hug the trees on the coastline. We went for a walk ashore that day, and had tied teapot to the trunk of a fallen tree. The dinghy was laying on the shore then, but when we returned Teapot was afloat and trapped under a branch, laying at a terrible angle. We were glad then to have tied the oars to the dinghy (we tied them together, and then onto the dinghy). Teapot wasn't having a good time, and neither did we because we had to wade over there in waist-high water to free it. In hindsight, we ought to have let out a longer line and to have tied Teapot further from shore. There are too many things near shore to trap a dinghy, and the tide rises and falls too damn quickly.

We did not expect to get internet here, but we do get it, depending on where the wind points us. As usual, the internet is very slow and good for light tasks but not for anything else.

We anchored here for over a month, and it was well worth it. Because the area is a marine park, BC parks has outhouses parked near the trail heads, usually. We found it a good place to empty our dry toilet. 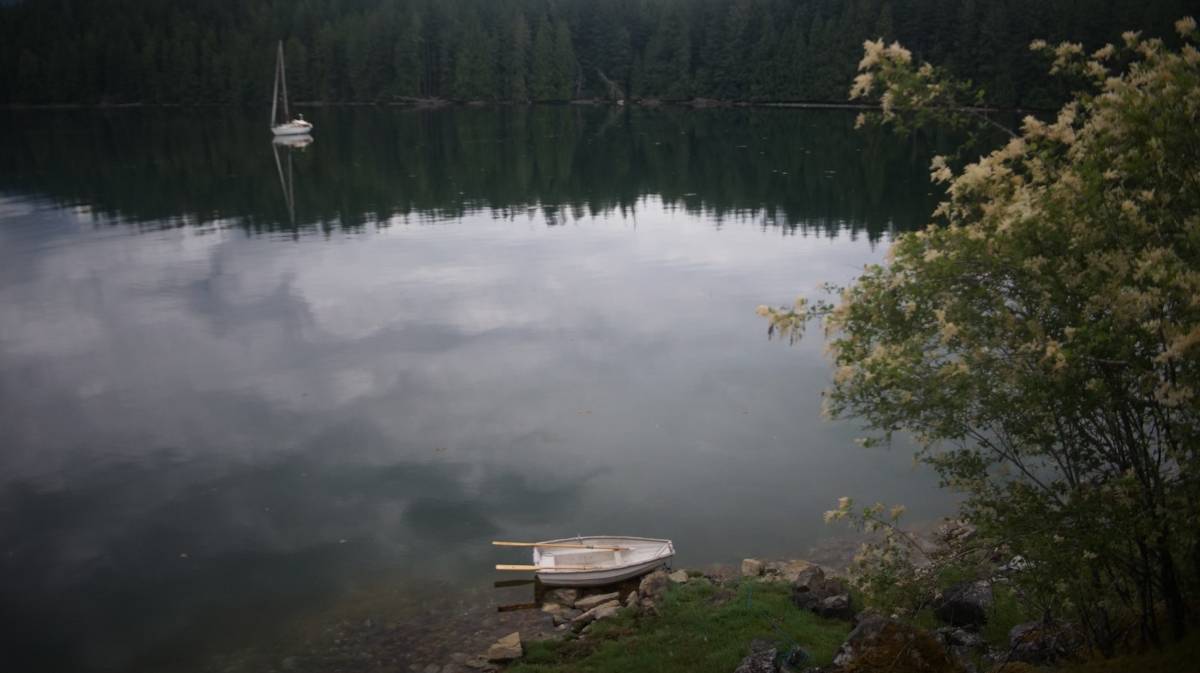