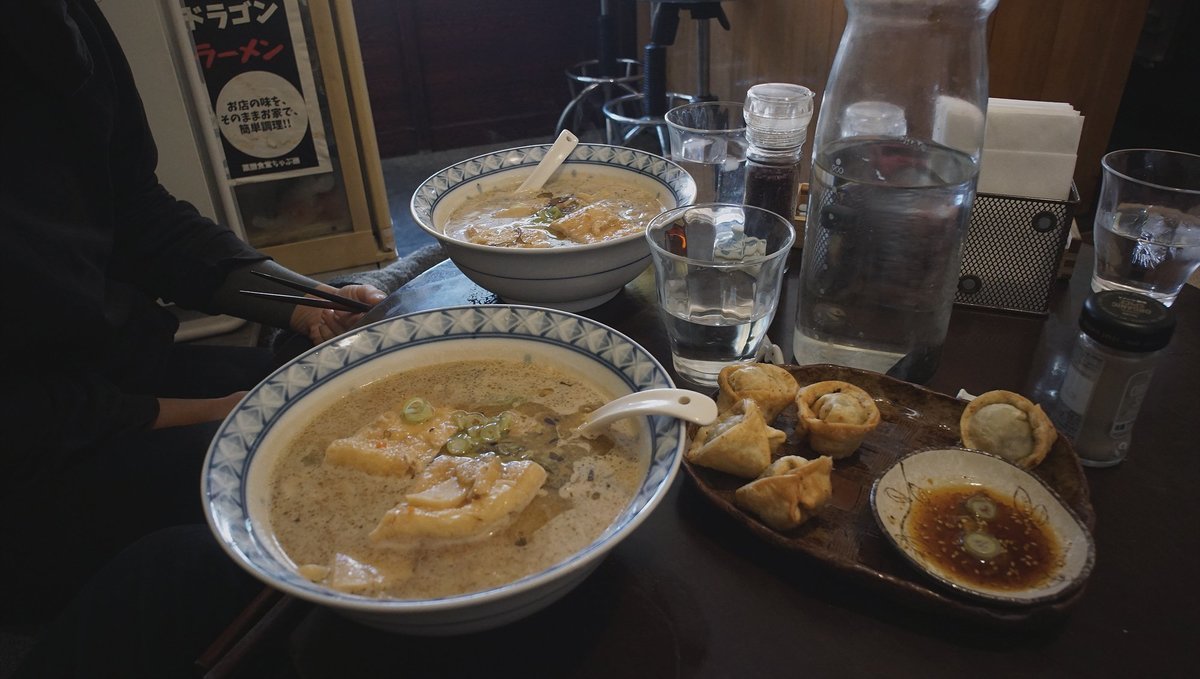 There are many ways to communicate your dietary restrictions while in Japan, one of them would be to simply say that you only eat plants, but because this is a foreign concept to many Japanese people, they will assume that you still consume fish, or eggs. We compiled a cheat sheet to help when ordering food or translating labels.

This list is long and the kanji are hard, but the more you translate the more you'll learn to recognize them. An obvious, but good way to avoid animal products is to not buy processed food and cook your own meals. When traveling, we realize that's not always possible so here goes:

The one we found to be most useful to describe our diet was:

Japanese people understood this term the most.

Onigiri free of animal products exist in Japan, it's only a question of reading the tags and identifying them properly. Here is a list of the ones to look for:

We have two recommendations of plant-based ramen places in Tokyo:

This tuber is a good egg alternative when baking both sweet and savory dishes. When grated, it becomes slimy and thick. The resulting texture makes it ideal as a binding agent (like eggs). Nagaimo imparts little flavor. It is perfect for okonomiyaki.

Nama-fu 生麩 : Solid gluten mixed with glutinous rice flour and millet, steamed in large blocks. It's shaped and colored in a variety of ways. Nama-fu is ideal for confectionary, sold with sweet red bean paste fillings.

Yaki-fu 焼き麩 : Gluten leavened with baking powder and baked into long bread-like sticks. The sticks aren't sold in supermarkets, but you'll find them in cut form, hard dry discs resembling croutons or bread rusk. Yaki-fu is typically added to miso soup and sukiyaki, where it absorbs some of the broth and acquires a fine texture.

A potato processed into a jelly-like substance. Konnyaku is delicious when eaten as faux-sashimi with soy sauce and wasabi. It's low-calorie, and high in fiber.

Kanten comes from red edible seaweed and is the binding ingredient in jelly-desserts. It produces a harder jelly than agar agar.

As of Dec 3 2019, a kombini called Vegan Store ヴィーガンストア opened in Tokyo’s Asakusa neighborhood. It offers a variety of plant-based products, but with a Japanese twist.

Read an article about it on Japan Today.

Many brands of Japanese soy milk contain added emulsifiers and flavourings that may be animal-derived. It's important to check with the manufacture for such specifications. This blog gives a list of soy milks that are confirmed to only use plant products, please check it out.

If you want to be 100% sure the soymilk is animal-free, you should look for 無調整豆乳 (mu chousei to-nyuu) non-adjusted soymilk.

In most cafes, even in 2020, cow's milk is more prevalent. You'd think that in Japan soy milk would be popular as a drink, but it is more often used in cooking. Some cafes in big cities (like Tokyo) offer soy milk, but like in other countries they'll charge extra for it. Coffee shops in districts like Shibuya are more likely to have some.

If you walk up to a vending machine selling canned coffee, you'll see many varieties but almost all of them contain milk, except coffee labelled as 'black' like 'Boss black coffee'. Drinking black coffee is always a safe bet.

花林糖 Karintou. A sweet and deep-fried dessert, made with flour, yeast and brown sugar, usually sold into fingerling shapes.

羊羹 Yokan. A jelly dessert made from red bean paste, agar agar (seaweed) and sugar. It's often sold in individual blocks. There are 4 main types: neri yokan and 水羊羹 mizu yokan, 蒸し羊羹 mushi yokan and 栗蒸し羊羹 kuri mushi yokan. Neri yokan is made with red bean paste, agar and sugar, Mizu yokan shares these basic ingredients but has a higher water content, mushi yokan is steamed and uses kuzu (arrowroot) instead of agar and kuri mushi yokan is like mushi yokan but with added chestnuts. Yokan often has added flavourings, which ranges from green tea, to black sesame, strawberry, houjicha etc. There's even salty varieties.

饅頭, まんじゅう Manjuu. A sweet bun, with an outside made from flour, rice powder, kuzu or buckwheat, and with a filling of red bean paste. There are two types, baked manjuu and steamed manjuu. There are many regional varieties that have different fillings and shapes. Some manjuu do use eggs, look for 卵, 卵白 or 白身.

餅, もち Mochi. A rice cake made from glutinous rice, and sometimes water, sugar and cornstarch. The rice is pounded into a a paste and molded into a shape. Mochi is served with a variety of toppings, like kinako (roasted soybean flour), shiso heaf (salted cherry leaf) or green tea powder.

蕨餅 Warabimochi. A jelly-like dessert made from warabi kuzu (bracken starch) and covered or dipped in kinako (roasted soybean flour). In stores, you'll likely find versions made with other starches, like potato or tapioca starch. 本わらび粉 (honwarabiko) 100% bracken root powder is rare, as if it difficult to harvest and only a small amount of its roots becomes starch.

Some convenience stores sell snacks and have little illustrations on the front that tell you which allergy-prone item is present. Many contain milk or eggs.

In some restaurants, ordering a dish called 'Yasai kare' or 'Vegetable curry' doesn't mean there won't be meat in it, they sometimes add it anyway. When ordering it's better to ask if there is meat or fish in it.

Buying bread that doesn't have added milk, egg or butter is difficult. It's possible to find, but finding them requires patience as this article attests.